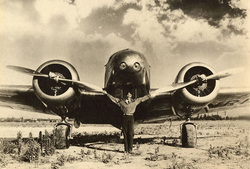 After Charles Lindbergh's solo flight from New York to Paris in May 1927, interest grew for a woman to fly across the Atlantic.
In April 1928, Amelia recieved a phone call from Captain Hilton H. Railey, a pilot and publicity man, asking her if she wanted to fly the Atlantic.  In a heartbeat, she accepted.  She went to New York to be interviewed, and met with project coordinators.  Soon, she was selected to be the first woman on a transatlantic flight . . . . . . as a passenger.  The wisdom at the time was that such a flight was too difficult for a woman to handle by herself.

On June 17, 1928, Earhart took off from Trespassey Harbor, Newfoundland, in a Fokker F.Vllb/3m named Friendship.  Accompanying her was pilot Wilmer “Bill” Stultz and co-pilot/mechanic Louis.E “Slim” Gordon.  About 20 hours later, they touched down at Burry Point, Wales, in the United Kingdom.  Due to the weather, Stultz did all the flying.  Even though this was the agreement, Amelia later confided that she felt that she was just baggage.  Then she added, “Maybe I’ll try it alone.”  The Friendship team returned to the United States greeted by a ticker-tape parade in New York, and later a reception held in their honor with President Calvin Coolidge at the White House.  The press dubbed her “Lady Lindy,” a derivative of Charles Lindbergh’s nickname,” Lucky Lindy.”