First Solo Flight Across the Atlantic 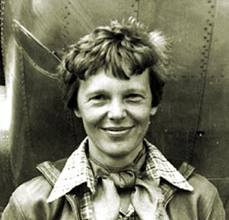 At the age of 34, on the morning of May 20, 1932, Amelia set off from Harbor Grace, Newfoundland with the latest copy of a local newspaper (the dated copy was intended to confirm the date of the flight). She intended to fly to Paris in her single engine LockheedVega 5B to try to surpass Charles Lindbergh’s solo flight across the Atlantic.  After a long flight of 14 hours and 56 minutes with the complications of icy winds, strong northly winds, and mechanical problems.  Earhart landed in a pasture at Culmore, just north of Derry, Northern Island.  The landing was witnessed by Cecil King and T. Sawyer.   When a farm hand asked, "Have you flown far?" Earhart replied, "From America."   The site now is the home of a small museum, the Amelia Earhart Centre.  As the first woman to fly solo non-stop across the Atlantic, Earhart received the Distinguished Flying Cross from Congress, the Cross of Knight of the Legion of Honor from the French Government, and the Gold Medal of the National Geographic Society from President Herbert Hoover. As her fame grew, she developed friendships with many people in high offices, most notably Eleanor Roosevelt, the First Lady from 1933–1945. Roosevelt shared many of Earhart's interests and passions, especially women's causes. After flying with Earhart, Roosevelt obtained a student permit but did not pursue her plans to learn to fly. The two friends communicated frequently throughout their lives. Another famous flyer, Jacqueline Cochran, considered Earhart's greatest rival by both media and the public, also became a friend during this period.