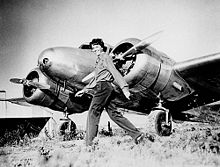 After flying across the Atlantic as a passenger in 1928, Amelia Earhart's next goal was to achieve a transatlantic crossing alone. In 1927, Charles Lindbergh became the first person to make a solo nonstop flight across the Atlantic. In 1932, exactly five years after Lindbergh's flight, Amelia became the first woman to repeat the feat. Her popularity grew even more. She was the undisputed queen of the air! Still, she wanted to achieve more. What did Amelia do next?

She decided that her next trip would be to fly around the world. In March 1937, she flew to Hawaii with fellow pilot Paul Mantz to begin this flight. Amelia lost control of the plane on takeoff, however, and the plane had to be sent to the factory for repairs.

In June, she went to Miami to again begin a flight around the world, this time with Fred Noonan as her navigator. No one knows why, but she left behind important communication and navigation instruments. Perhaps it was to make room for additional fuel for the long flight. The pair made it to New Guinea in 21 days, even though Amelia was tired and ill. During the next leg of the trip, they departed New Guinea for Howland Island, a tiny island in the middle of the Pacific Ocean. July 2, 1937, was the last time Amelia and Noonan communicated with a nearby Coast Guard ship. They were never heard from again.

The U.S. Navy conducted a massive search for Amelia and Noonan that continued for more than two weeks. Unable to accept that Amelia had simply disappeared and perished, some of her admirers believed that she was a spy or was captured by enemies of the United States. The Navy submitted a report following its search, which included maps of search areas. Neither the plane nor Amelia nor Noonan were ever found. No one knows for sure what happened, but many people believe they got lost and simply ran out of fuel and died. Amelia Earhart was less than a month away from her 40th birthday.