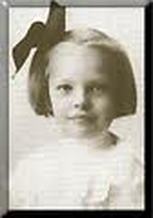 Amelia Mary Earhart was born to Edwin Earhart and Amelia "Amy" Otis on July 24, 1897, in Atchison, Kansas.  Amelia's father traveled a lot because of his job as a railroad sales agent.  The family often traveled with him.  Edwin was an alcoholic, so when situations got bad, Amy would send Amelia and her sister, Grace, to their grandparents.  There they sought out adventures, exploring the neighborhood, climbing trees, hunting for rats, and taking breathtaking rides on Amelia's sled.  Even after the family was together, Edwin still struggled with jobs.  Amelia was good at math and science, and switched schools a lot. She went to Hyde Park High School.  At a Long Beach air show in 1920, 10-year-old Amelia paid one dollar and took a plane ride.  Even though the plane ride was only for 10 minutes, the minute Amelia stepped off the plane, she knew she wanted to fly for a living.

Amelia started saving up right away.  She did many odd jobs and raised money for flight lessons from Anita “Neta” Snook.  To look more like a pilot, Amelia cut her hair and slept in her new leather jacket to make it seem more worn out.  In the summer of 1921, Amelia bought a used Kinner Airster biplane that was bright yellow and named it the Canary.  On October 22, 1922, she flew the Canary 14,000 feet high – a world record for women pilots.  On May 15th, 1923, Amelia became the 16th woman to receive a pilot’s license by the world’s governing body for aeronautics, The Federation Aeronautique.  She got license No.6017.

Throughout that period, the Earhart family lived mostly on an inheritance from Amy’s mother’s estate.  But by 1924, money ran out.  With no immediate prospects of making a living flying, Amelia sold her plane.  After her parents divorce, Amelia and her mother went on a trip across the country starting in California and ending up in Boston.  In 1925, Amelia once again enrolled in Columbia University, but was forced to abandon her studies due to financial problems.  She found employment first as a teacher, then as a social worker.  She gradually found her way back into aviation, becoming a member of the American Aeronautical Society.